A Weekend of Hindu Spirituality

Christian and I attended a weekend event filled with Indian spirituality at Christian's home, Greifenstein, in Switzerland. Greifenstein turned into a sea of bright colors as two swamis in their orange robes and over 40 participants in their saris and other colorful Indian garments filled the grounds around the Meditation Hall for two full days of learning and praying. Swiss-born Swamini Vishwakishori (right) and Italian-born Swami Vishwaaniruddhananda (left) came to Greifens 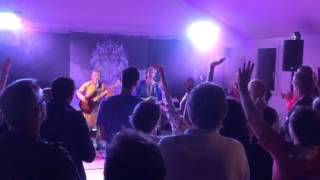 Greifenstein, Christian's home in Switzerland, was turned into a Hindu spiritual rock concert hall on this beautiful Friday evening. The event which was titled "Bhakti Rock" was organized by a group of people from nearby towns who follow Hindu spirituality. The word Bhakti means "devotion". The six musicians came from Germany, France and Latvia. The building in which this concert took place was formerly a cow shed which has been renovated to hold lectures and events with a ro
bottom of page